No posts.
No posts.
Home
Subscribe to: Posts (Atom)

Education First of the stand-alone Conflict blogs, looking at the history of education and its use in social control. How kind they are to teach our kids to be obedient
Nazi Germany, looking at how a population gets lead by the nose
Bosnia, a modern take on the same methods
Ulster, looking at the smoke and mirrors employed,
Scotland, big oil and grinding poverty standing side-by-side
Media, looking at how and why frivolous drivel is dumped into our minds by the owner class
The Trough, where Orwell's pigs get scrutinised
Resource Wars, bringing democracy? Only if you've got oil
and Peak Oil, the black stuff is running out. ...

neil2445
My name is Neil Jackson. I'm the Meltdown photographer and media ops guy, a kind of anti-Alistair Campbell. Meltdown helped organise the G20 protests and the take-over of Parliament Square from May 2010. I'm a radical British photojournalist convinced we are being blinded by an education system designed by the powerful for the powerful, a dumbed down media with the same agenda, and a corrupt political system where grasping liars get to share, with their banker friends, the fruit of our sweat. Totally independent of the mainstream media for nearly two decades, I have a craft trade which allows me to travel freely about the country and abroad. neil-24842445@hotmail.co.uk

The Flower of the Power 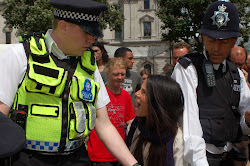 In May 2010 Meltdown helped organise a take-over of Parliament Square, London. The politicians were in disarray with a hung Parliament and the London Mayor's clumsy handling of the situation meant that Democracy Village, as the encampment became known, became a permanent fixture for months. Trevor Radfax recorded the Queen's bemused face as she arrived for the State Opening of Parliament (see Radfax link: White Flag Revolution (a must for Nirvana fans)).

The Square became a magnet for radicals, critical thinkers and the open-minded alike. 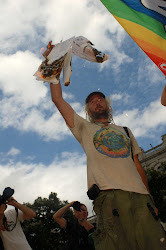 G20 - outside the Bank of England 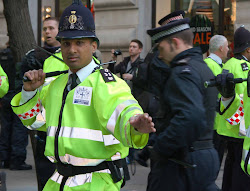 An officer ready to strike

Links to my photojournalism:

My Flickr account, which spans all the best of my photography work, from the early days in Bosnia and Northern Ireland, right up to the present.

Conflict, which has been endorsed by some notable people, including John Pilger and Cambridge history Don Professor Brendan Simms.